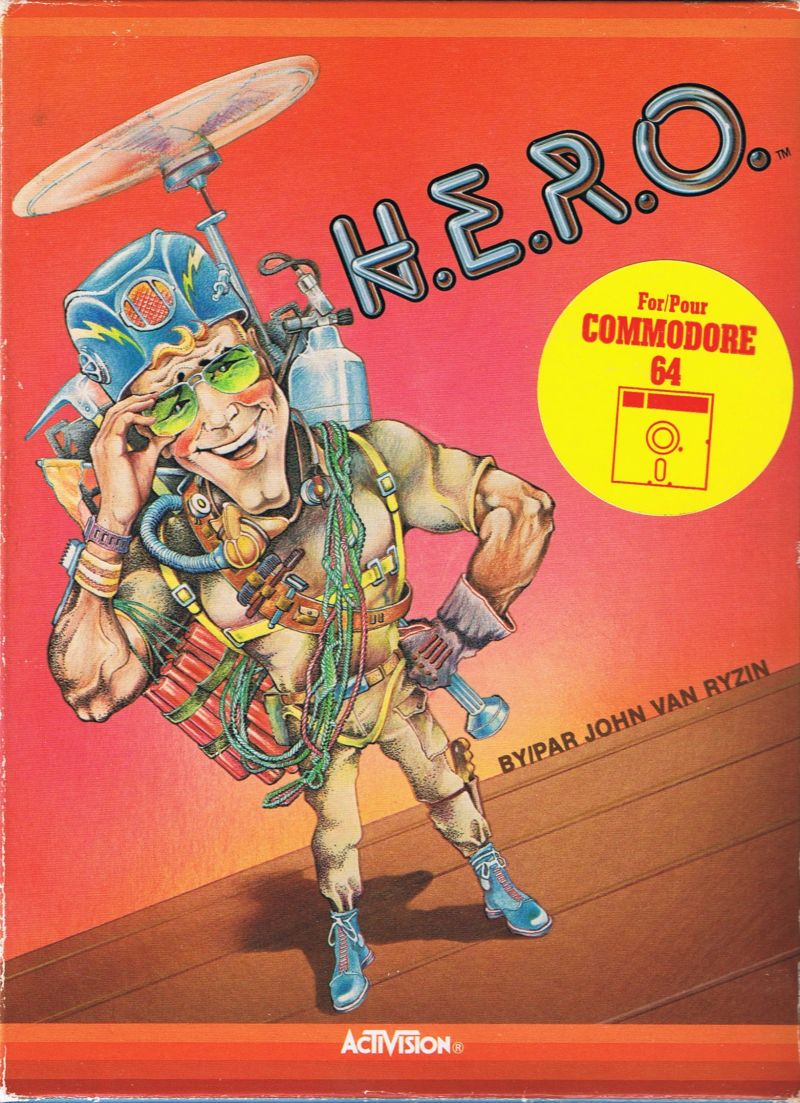 It was back in 1984 when the bet of a young and unknown American programmer who responds to the name of John Van Ryzin: H.E.R.O. A title that thanks to the extraordinary success that is about to gather, recently at the moment it would have entered forcefully in the Olympus of cult games, the umpteenth legend and the record of sales signed Activision!

I have always loved the games of this software house, if only for its splendid logo that still exerts a perverse fascination on me but H.E.R.O., that is Helicopter Emergency Rescue Operation deserves a particular speech. In fact in my opinion it is one of the games that I still consider unmissable among the many born from the famous US software house.

The plot of the game is very simple: Save several miners trapped in the depths of dark underground caverns. For carry out our mission we have supplied a special vehicle transport which consists of a mini pod with a portable propeller that allows us to fly and move quickly and with extreme precision. To overcome the many obstacles and dangers of the mission we then have a laser beam in the protective helmet, and a bag of dynamite sticks, useful for break down the countless walls and dams that block our way. Some of these in addition to offering shelter to several hostile animals like spiders, bats or snakes can be infested with poisonous mushrooms: in that case even the only contact could kill us instantly!

Each mission corresponds to a level, and of course for each new level the difficulty grows by introducing the presence of always new obstacles: pitfalls, fatal traps and any other kind of hidden pitfalls, such as false signals that direct you to the wrong paths at best if not towards certain death, or the lanterns that, breaking on contact, leave them in the dark, or huge underground rivers that leave no chance in the event of a fall among their poisonous water. As if all this were not enough, to make our task even more heart-pounding there is also the inexorable constant consumption of the energy autonomy of the pod-helicop which limits the mission itself over time!

The graphics of H.E.R.O. it is certainly not spectacular but after careful observation one learns to appreciate it deeply. It is so special and essential that it seems almost made with a brush and a palette of colors. And perhaps the continuous explosion of colors and shades always different, but always in a perfect chromatic balance to make the paltry palette of the game so fascinating.

However, the real strength of H.E.R.O is without it doubt the playability. The levels, always different, are thought for art in the forcing the player to engage in a mixture of logic, dexterity and tactical conduct in having to overcome small mazes, infested with obstacles in the shortest possible time for the consumption of available energy.

If on the one hand the extreme simplicity of H.E.R.O. enhances the genius of the idea and its oiled and exemplary development, on the other it amplifies the poverty of resources and means employed revealing many limits, such as the absence of a High Score, or a background soundtrack. Even the winning weapon of playability must pay a tribute to the impeccable essentiality by recognizing the lack of choice of an initial difficulty level.