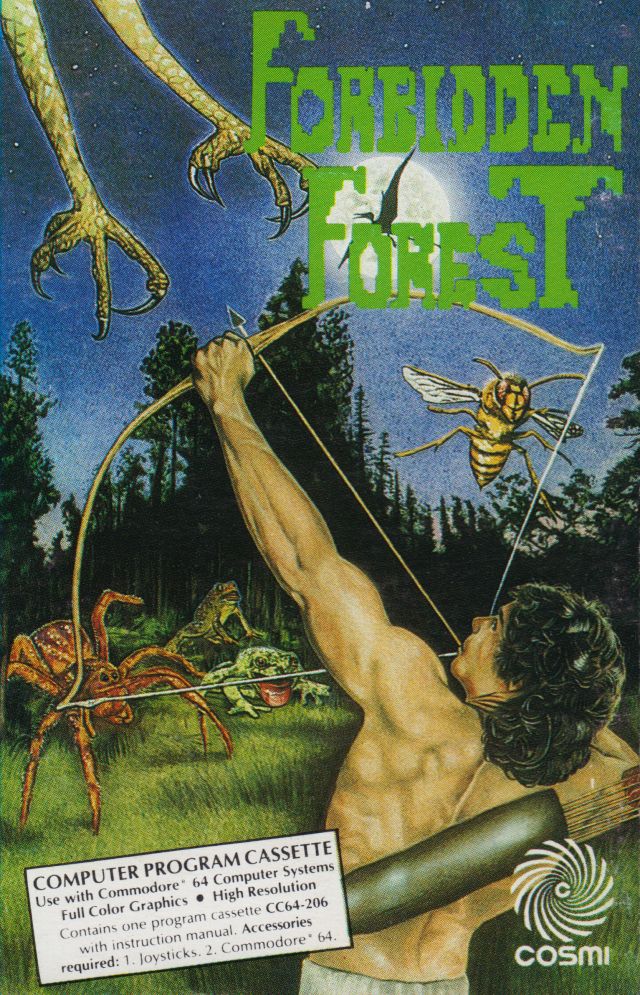 I think many will agree with me in judging this title as a reductive if not wrong. The haunted forest or the cursed forest, here is perhaps a combination that succeeds in transmitting that sense of restlessness that is hidden and transpires in original title. And it is precisely this anxiety that from the first screen emerges arrogant in the Wagnerian tones of the opening music, and inexorably rises above everything and spreads until it becomes anxiety, then in fear, culminating in terror!!!

I imagine that many of you will smile at these words after playing Forbidden Forest, and wondering from which psychiatric hospital I’m writing right now but all those who like me have known this game on Commodore 64 will understand me. Indeed it may seem ridiculous today, and it certainly takes something else to scare us, but forbidden Forest preserves the same halo around itself after so many years. The same speech as those masterpieces of the Gothic literature of A. Radcliffe, E.A. Poe, Lovecraft that although they can no longer upset us, they continue still to stir our soul and remind us of ancient forgotten legacies.

Music is certainly an essential component to give the game a continuous tension and catapult us suddenly into the living of the fight: spiders, bees, frogs, skeletons, snakes, dragons suddenly fall on us in the most unexpected moments and when they succeed in surprising the screen becomes a dense pool of blood. Just a bow with arrows and the skill of the player can make the difference between life and the death.

The graphics are highly suggestive, a play of light and shadows with a handful of colors they give the images a pictorial touch it makes you forget to watch a videogame. Although the game is reduced to simple shooting the temporal component is marked by the phases of the day and night, and the continuous gait in the maze of the forest creates a striking effect of depth in a black romance atmosphere.

The creator of this game deserves a final word: Paul Norman. He is the author and composer of other beautiful games like Caverns of Khafka, Aztech Challenge, Super Huey, Beyond Forbidden Forest, Navy Seal, The President is Missing; titles that all contain the same components as Forbidden Forest enough to talk about a personal style of the author that make his work unmistakable.