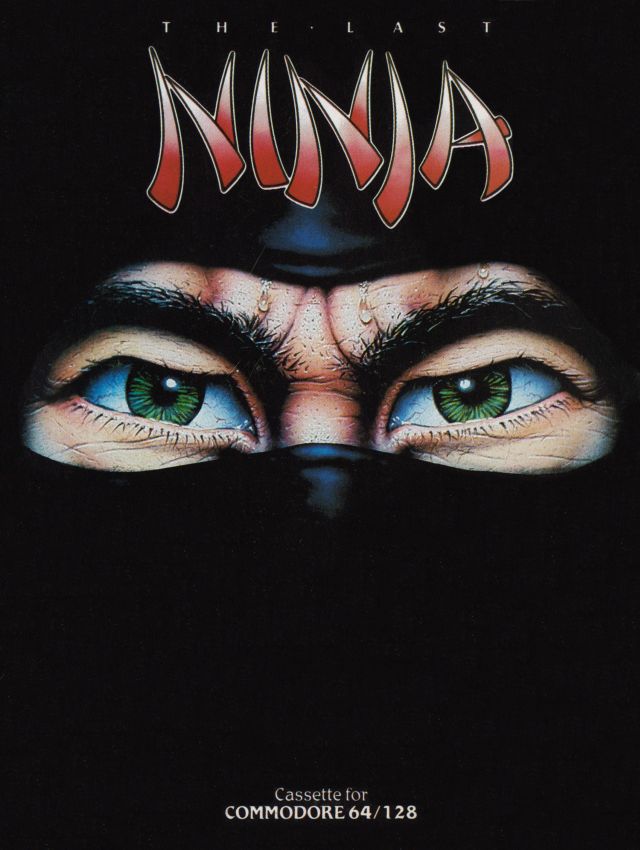 This is my first review in the videogame world, and I wanted to choose a game that at the time entered my heart, and that still today represents a piece of my childhood made of so much, but so much, Commodore 64.

It was the summer of 1987, I was 10 and the C64 was my hot stuff. Well, the floppy drive was the hot stuff, because all my friends had the cassette player. In that summertime, at my friend’s place, I discovered the incredible The Last Ninja game, with amazing graphics. I still remember the first time I saw it. That friend of mine was playing the second level “The wilderness”, and I was so excited to see him passing from a level to another (every game was subdivided in levels).

It was love at first sight.

The Last Ninja was the first 3d-isometric game, an invention of System 3, the british software house that produced it. The system 3 is still on business now.
The good thing of the Ninja was the so-easy in-game control method, and the bad thing was the damn difficulty of passing from a level to another. This was because it was not just a game like “hit everyone in the game”, but you had to solve puzzles, collect stuffs useful for the next levels, well, a very hard game. For example, if you forgot to take the key in the first level, you wouldn’t arrive to the 4th level. Just magine your reactions in front of the cassette after forgetting some stuffs in level 3 or 4: a lot of bad words came out from your mouth.

The Last Ninja story was simple, but very engaging. A mad and bloody Shogun, Kunitoki, was trying to steal the old tecniques and traditions of the “Ninjitsu” ninja clan. This sect of shadow warriors had its tradition on the island of Lin Fen, where the masters handed down the teachings of the Koga scrolls to their descendants.
Kunitoki knew that once every 10 years warriors would gather on the island to learn these teachings, and he took the opportunity to invade it and kill all the Ninja.
The only survivor of this genocide was Armakuni, who remained in his village at the Bunjinkan temple, waiting to go to the island with his brothers to make new acquaintances.

But the sad news of the Lin Fen massacre was not long in coming, and he, The Last Ninja, had only one way to take revenge: to arm himself with courage and leave for the island to defeat Kunitoki.

The review of the “hot” magazine “Zzap” in 1987. At the time they had not yet understood the great value and potential that the game had. In fact, the reviewers dedicated only a blurb to it, but the game was notoriously very successful.
The “Hot Game” medal didn’t suit him very well.

What characterized the Ninja compared to other games of the time were the graphics really spectacular, but above all the sound, which for the Commodore 64 was exceptional. The programmer Dan Baglish had created a series of oriental soundtracks, one for each level, but not only; in the cassette version there was a track for each loading (actually not as beautiful as those present in-game).

Unfortunately, there was no sound effects. But evidently the amount of graphics did not allow to have a soundtrack and special effects (we always talk about 64k of RAM at the time).
But in any case the System 3 had squeezed (for the time) all the potential of the little Commodore’s house, giving us a magical experience.

Let’s go to the game.

The Last Ninja is divided into 6 levels, to access which you have to follow a very precise path by completing the puzzles and collecting the objects useful to advance in the game. Among these objects include the weapons (Shuriken, the classic Ninja stars, the sword, the stick), the apples (useful for recovering lost lives) up to the much coveted parchment.

Our hero Armakuni begins his adventure in the level “The Wastelands”, the wastelands full of rocks where he will necessarily have to stock up on weapons and objects necessary for his journey towards revenge.

“The Wilderness”, the wild and mountainous land that will lead him almost into the gardens of Kunitoki Palace.

“The Palace Gardens”, the gardens of his arch-enemy, to find the way to the dungeons of Kunitoki’s royal palace.

Here our hero will have to unravel the underground labyrinth in order to return to the surface and access the palace of evil.

“The Palace”, the interior of the evil Shogun’s palace, and finally the final clash in “Inner Sanctum”, the sacred place where Kunitoki hides and where he keeps the scrolls of knowledge for himself.

The graphic interface, simple and essential, showed all the useful elements, that is:
Armakuni’s energy reserves, weapons in his possession as well as objects, and also the enemy’s energy.
It was quite simple to command our hero, making combinations of joystick and fire button, even if sometimes you found yourself caught between picking up an object or giving your opponent a sword.
Finishing the “Ninja” was not an easy task, at the time it took me several months, and without a solution (at the time the magazines reported the solutions of fearless players who melted the “biscottone” feeder in trying to finish a game). But the satisfaction, I still remember that winter afternoon, was one thing.
I still listen to the soundtracks today thanks to the “SID” software. I may be an 80s patient, but I find that back then programmers of a few kb of memory were pulling out things that most people dream about nowadays.

N.B. The Last Ninja did not come out on the 16-bit Commodore, the AMIGA 500. Instead, a “remix” version was made, which in the end was “The Last Ninja” (go figure out why). The music was beautiful but never reached the original beauty of the 8 bits of the Commodore 64.