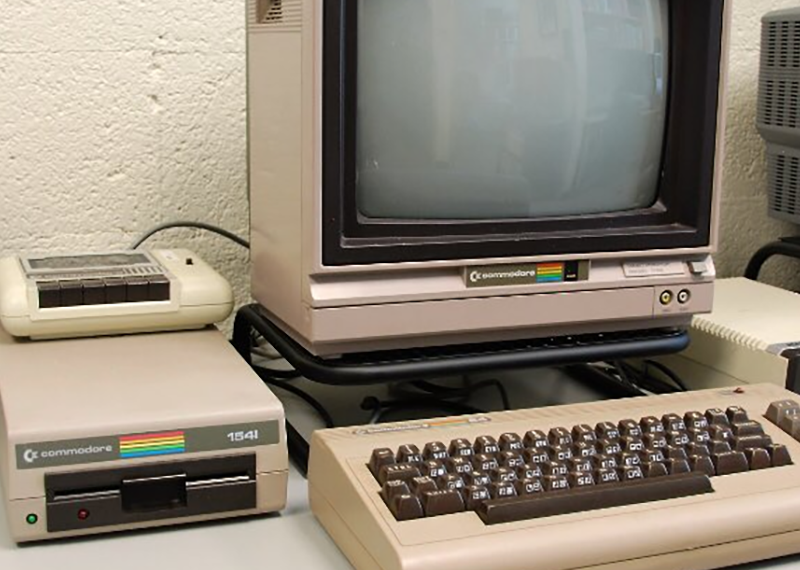 I was about 4 or 5 years old when my dad decided to buy a computer. I didn’t know anything about computer; for me it was simply a magic box, with images and sounds. Connected to a 14 inches TV (luckily a color TV) by a 3 metres cable and 2 joysticks, I used to stay in front of it with these easy stupid lovely games. This is one of my best memories with my dad. If you don’t mind, I would like to dedicate this novel to my dad.

The Commodore 64, the only one game machine in the 80’s, and maybe the first “Personal Computer”, oblijed millions of people to buy a calculator machine for the family, to create an entire generation of happy people: boys, girls, adults, babies. This 40-year-old generation have good memories about this 8-bit computer, and I’m proud to belong to the “8-bit generation”.

The story of the little Commodore monster began with Jack Tramiel, a polish man who escaped the concentration camps. He was good in repairing typewriters, and he made his initial fortune with this activity. In 1953, in the Bronx district, he started his adventure with a little electronic repair shop. He was good in repairing, but also as a manager. So in a brief time he started selling the typewriters, in the U.S. but also in Europe. His company, named “Commodore Portable Typewriter Company”, started to fly with big affairs. From 1955 to 1960 he made big deals, but then with bad investments, his business went down in a few times. But Tramiel was so smart so he decided to go to Japan to learn the new technologies and to understand how to bring that at home. When he came back he decided to transform his job. No more typewriters, but electronic calculators, the future.

Tramiel’s calculators earned him about 50 million dollars, thanks to Texas Instruments components. He used to buy the components and sell them with a good price. Not so bad for a poor man who repaired typewriters. But in a few time Texas Instruments sniffed the business and started producing himself electronic calculators. This was so so bad for Tramiel’s business and also for Commodore.

That happened in the early 70’s. But Tramiel was so far away to give up, and he decided to transform his business again, buying electronic companies. The most famous one was the MOS Technlogy, where Chuck Peddle was working.

Our beloved C64 will be born thanks to this synergy and cooperation. At the end of the 70’s (in 1977) one of the most important calculators of the era cames out: the PET 2001. The Personal Electronic Translator, which was considered the first Personal Computer. In a unique module, with keyboard, monitor, and datassette to save and load programs. It was very powerful with 6502 Processor and 4k of RAM memory (that is ridicolous nowadays, but huge for the past years), a 9-inches monitor capable of 40X25 characters. The 6502 and the Zilog Z80 by the italian Federico Faggin were the most powerful and cheapest CPU in the market.

With a price that was less than 1000 dollars, the PET 2001 was the best seller at the end of the 70’s, sending Commodore in the olympus of the great electronic manufacturers.

Despite the success of the latest product of Commodore, new problems were coming for Tramiel’s businness. Apple and Atari were selling new products, with a connection to the TV! It was an incredible innovation for the masses, because now you could use programs and games with huge displays, exceeding the limit of small character displays. Apple II and Atari 800 were destroying the PET 2001. Commodore engineers decided again to make a new technology step forward. They broke down the old idea of “all in one”, creating the “VIC 20”.

With the power of the 6502 Processor, the new machine had 5k of RAM and 20k of ROM memory. And the very innovation for a calculator machine, the chip VIC (video interface chip) from MOS Technologies, a dedicated microchip for graphics and sound. Finally you could connect you machine to your TV-SET or to your monitor, at home. The price was so competitive (about 230 dollars) for a powerful machine like that, and no one could compete. With the initial sale of 1.000.000 units, the VIC 20 sold in the world 2.500.00 pieces. With this success, the Commodore machine opened the door to a new important market: the videogame market.

This new market oblijed the Commodore engineers to think about a powerful Personal Computer, capable of reproducing high-level images and sounds. It was the period of the arcade places, where millions of guys put a lot of coins inside the lovely arcade game machines.

In 1981 MOS Technology started his project for a new chipset, to put this into the new gaming Commodore Machine. Despite the project was ready in November, Tramiel said “NO”, beacuse he pretended the machine to have 64k of RAM memory. It was a problem because the memory was so expensive. So he forced the engineers to ran fast, to produce the prototype for the Winter Consumer Electronic Show, in Genuary 1982. The aggressive market techniques, and the production costs that were falling, would take the VIC 30 (what? the VIC 30?)… Yes, the new project name was VIC 30, until Mr Tramiel decided to give the new machine the name 64, because of the installed RAM.

The C64 was born. Finally. And his success still continue to make noise. The Commodore 64 first appeared at 1982 italian SMAU (what memories!), and it was sold by the italian distributor of Commodore (Tramiel did it again). In a few time destroyed the 8-bit competitors, like Amstrad CPC or Spectrum ZX. Do you remember the “powerful” Apple II and Atari 800? Completely destroyed by the new chip of the Commodore 64.

It was not only a Personal Computer, but a wonderful and powerful game machine. He has given us good memories, and now he lives in old machines still alive, and in Computer emulators, that allow us to play the smashing titles of that wonderful technological monster.

Datassette and 1541 drive were brilliant by the Commodore house. The richest one had a Floppy Drive (thanks dad) 1541, capable of reading 5 1/4 floppies, with a very fast loading speed (no datassette can do that). And the chance to play a game in tandem, thanks to the second joystick connection.

Two joystick types, sold in the early 80’s. No autofire and no microswitches, but there were so lovely.

Now and for a decade, the Commodore 64 was the “game machine”, beaten only by his big brother, the Amiga 500. The Commodore 64 sold about 12-17 units, but someone  asserts that Mr Tramiel’s baby (the Commodore) sold 20 millions of “biscottoni”. It was updated twice a times, but the hardware configuration remained the same as the original. Even the floppy drive was updated, but the diskette capacity remained the same. With the great success of the game machine, the first software houses came out, companies that wanted to develop their own games for the market. But games and software houses will come in the next part of my story, in the second part of the novel of Commodore 64.

The Commodore 64 has grown a era of young and not young guys. He connected youngs and olds. In a moment like the days we are living in, where “games machines” are no more, beaten by every electronic device in the market, the old grey little box gave us a lot of memories. Even if today we are scared about real-time graphics, I cant’ forget those colored pixels and the incredible sound that came out from the TV. The Commodore 64 lives now in our memories, in the historical events, in the t-shirts, in the old-fashioned gadgets, and in the old-fashioned devices that tried in a poor way to take us back to 80’s. Unfortunatley the new technologies made the C64 graphics and sound very old, and the SID chip now is forgotten into a drawer, into our basements. I hope our children and children of the future will appreciate the “old school” technology. With this obsolete technology we passed ours and ours , days and years switching on old cathode ray tube TVs (black and white and coloured), with bad words awaiting for a cassette to load, or inserting a floppy disk into the 1541 drive, with the lovely command Load”*.*”,8,1