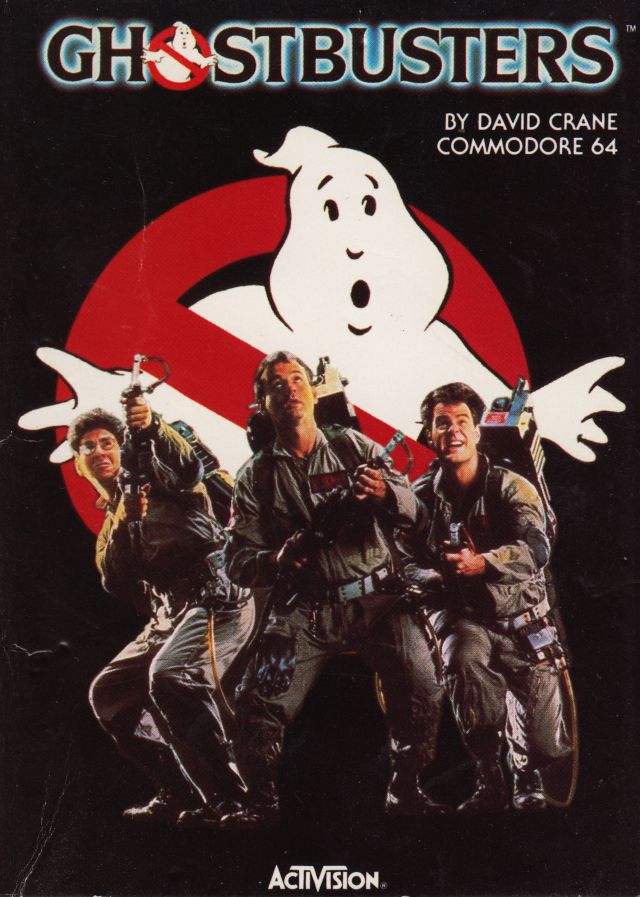 “Who you gonna call? The Ghostbusters!!!” That was the theme tune of the poster about the movie, and also the theme song. David Crane from Activision smelt about the movie success and in 1984 caught the rights for the conversion.

In that era the Commodore was a “little game” machine, but Activision was already a big software house and David Crane such a visionary man in the 8-bit age. He obtained the license for the movie conversion and with with the help of Adam Bellin created the wonderful game of Ghostbusters, that was such as magic for those years.

The game was based on the movie line, so you had to create the Ghostbusters team, buy the stuffs (like the ECTO-1 1959-cadillac car) , and then, go on businness!! The gameplay was so simple, like chasing the ghosts around New York and then putting them into the ghost farm. On the screen our heroes move around by the ECTO-1, trying to catch the ghosts shown on the screen. Then they stop in the haunted houses (red yellow or orange depends on the ghost level). In front of the haunted house, 2 players should capture the ghosts, but how? The answer is: by moving one character and then the other, to trap the ghost inside the two rays, until the trap is opened.

Dunring the game you need to have a look at the “city’s pk energy”, the ghost energy level. This level will increase for the entire game until the final peak, that will transform into the Marshmellow man, the big ghost to be destroyed. During the game you have to earn money, to close the initial debt with the bank. If you won’t be able to pay the debt, the game will come to an end. In the other case, the Ghostbusters will have the final match with ZUUL to become heroes.

The best part of the game was the sound, amazing! The graphics was so-so but the digital sound was extraordinary, and also the voice: yes David Crane gave the Commodore 64 a digitlized voice. The initial laugh and the “Ghostbusters!! every time a ghost was caught, but also the initial theme tune with a bouncing ball on the words of the song, like a karaoke: amazing. Maybe the game was not a champion in graphics and sound, but it still remains in our dreams like a milestone in the history of the Commodore 64 (and, for the story, I used the tips to obtain a lot of money to finish the game).

Here’s the longplay, with the wonderful and amazing theme tune

n addition to the disc and cassette version of the game, we decided to do what we liked by adding the manual and the floppy label to be printed. I ain’t afraid of no ghosts!