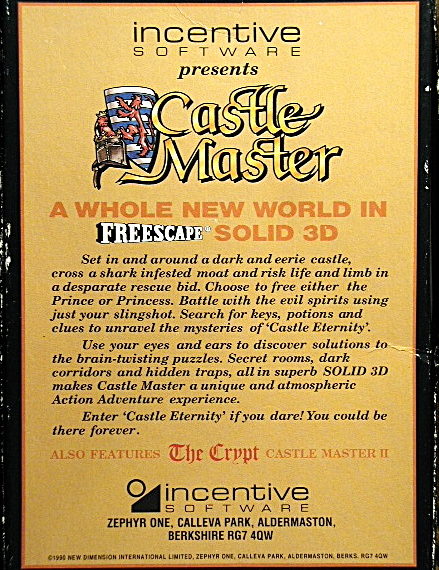 It was the year 1990, the first of a long decade that would have made us dream of music, movies, beach holidays and …. Video games! In those years there were several titles for the Commodore 64 or rather headlines that made us run to the shops and spend hours and hours observing the beautiful video game covers and maybe if you were lucky you could even try them. A game that intrigued me so much at the time was Castle Master, a game developed by Teque Software Development and published by Incentive Software.

With the arrival of 3D games, the gaming system was already showing the first signs of a change and this game was one of the very first. The Commodore 64, despite not having all the cards in order, tolerated the game quite well, the only drawback was the management of movements and general animations that suffered from chronic woodiness, however this soon took a back seat thanks to the substance of the game itself, full of exploration, dream setting, engaging music, and ultimately exciting gameplay. At the time I was not very interested in solving puzzles and I had no patience, so shortly after I ran aground, fortunately shortly after the solution was inserted on Zzapp so I took it back and then obviously finished it.

The game starts outside the huge castle near the drawbridge. Initially the player chooses between playing as the prince or the princess. The unselected character is then carried away by a dragon in Castle Eternity. (The position of the keys and some other elements differ slightly between the two characters.)

The game requires the player, through a first-person view, to explore Castle Eternity. There are riddles on many of the castle walls, which give game hints. There are also keys and pentacles hidden in various locations for the player to collect. Many rooms contain spirits that attack the player and reduce their health. The player’s health (represented by a barbell where the weights indicate the amount) is also the player’s strength which is important for some puzzles. The player’s only weapon is an unlimited supply of stones to throw, but a single hit is enough to exorcise most spirits. The ultimate goal is to kill the Magister boss spirit (who can only be killed when all the other spirits in the castle are destroyed) and then save the opposite number of the character.

There are no lives for the player; if health is reduced to zero the game restarts from the beginning unless the player loads a saved game.

In addition to avoiding enemies in order not to lose energy, you have to be careful not to fall from high heights and initially they could be inevitable, you just have to make the callus. The suggestive music that will accompany you throughout the gameplay will be an excellent source of company and perhaps will sweeten the slowness a little. This game had a sequel, The Crypt which was almost the same as the first one, however I recommend everyone to play it if you liked the previous one. I give you a very useful clue to finish the game: Make sure you get all the keys! If you miss one you will not be able to finish the game. If you really can’t find them, I leave you the game play, also because some are in unthinkable places. Enjoy!