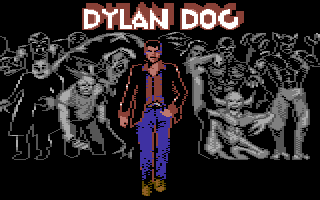 From an idea of Tiziano Sclavi, a comic is born that will change the history of many, Dylan Dog. After the timeless cowboy Tex Willer and the thief Diabolik comes the nightmare investigator!

A man in his thirties, always dressed in a red shirt, black jacket, jeans and Clark shoes, he is a simpleton character formerly a Scotland Yard policeman. Flanked by his mustachioed and bespectacled assistant Groucho, always with the joke ready, he makes his first debut with the book “The dawn of the living dead”.

I started following him from number 59 “People who disappear” I bought it out of pure curiosity and it was immediately first love. Since then I have never lost any number and slowly bought the back issues too.

The success was so much that under the Christmas period Simulmondo developed the first official game of Dylan Dog “The killers” title of one of the very first albums, precisely n.5 So I ran to a bookstore that also sold used comics and got that number.

The story in the comic is not directly connected to that of the video game except for the context and several quotes, precisely it was like a second episode but with more action.

Typically horror splatter setting and of course us as protagonists. It all begins with an invitation to a party held in Doctor Evil’s castle, a strange and dark individual but perhaps also interesting as our protagonist accepts the invitation without asking too many questions.

Once there, guests have a drink and turn into ferocious assassins who kill everything they see moving.

Dylan the only one not to have drunk (being teetotal sometimes pays) will find himself facing hordes of murderers, solving puzzles, and will come face to face with Professor Evil where he will put an end to the nightmare.

The music at the beginning of the game is quite atmospheric and suggestive to play with the lights off, engaging and motivating from a playable point of view. Our protagonist will be armed with only fists and his inseparable western-style revolver with only six shots that must be used at the right time and with the right enemy since some killers can not be eliminated neither with fists nor with sidearms found along the way. The setting, as we said, is the entire castle with fixed screens divided over two floors that can be reached by stairs or by elevator in some points; Our task in addition to killing everyone present in order to finish the game at 100% (not that this affects the ending) will be to recover essential items to continue the game such as keys to unlock the doors of the respective color and solve puzzles that will be provided by the very few still sober survivors, puzzles that can unlock passages but also traps to watch out for before the game ends a bit quickly.

During the pause menu, the inventory with the objects in possession will appear, Dyln’s health marked by a plaque that gradually rises with each shot received, the time limit always marked by a lunation and the infamous number 666 (also number license plate of Dylan’s beetle) which decreases with each kill and each puzzle solved; Can you get it to 000? And above all, will you be able to find Doctor Evil and put an end to this daydream?

I leave you with the download link, see you soon 🙂