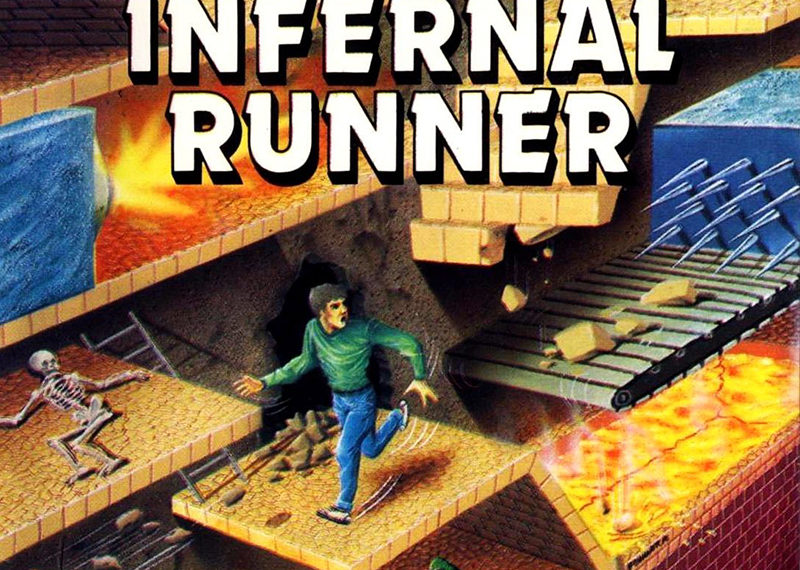 In 1985 an unknown french software house, the Loriciels (or Loriciel, depending on brand problems happened in 1990) created a new type of game, the first in order of the horror-splatter game genre. That game was Infernal Runner.

I apologize about some images, from the Amstrad version. This is because I realized it is very difficult to find informations about this game. But in my head it still remains as a game milestone, because of its killing gameplay, a sort of “neverending game”. Speaking about the game, it’s difficult to estabilish which was the first version produced, because on the Internet some websites tell that the first was the C64 one, and other sites tell the first one was the CPC. So it’s hard to say.

Infernal is a multidirectional platform game, in which our player has to escape from a sort of prison, a closed house with no exits. To escape from that prison he needs to use platforms, lifts, ladders, ropes and whatever, to capture all the keys (useful to open the sarcophagus) and finally go out. At this point the explanation seem to be simple, but troubles are just around the corner.

The house is full of traps, bad keys and doors, moving walls, and the “weapons”, special stuffs that the owner left in the game area. Those weapons will activate by the player with a mistake, by a bad key captured, or by moving a lever. This is the center of the in-game-spirit: the horror and platter soul. Anytime our hero dies, the blood floods on the screen: when the player is mashed between 2 walls, burnt by a laser, punctured by a piercing tip. And everytime we have a river of blood.

So, a very bloody and violent game; but also a game with puzzles to solve, with directions to find, tricks to learn and use. I played this game for a long long time, before understanding the way to finish. But finally I understood that the game has no end: the moment you finally go out from the prison, an ambulance knocks down our hero and take back him to the….house!!!

Those french programmers have done it!! So it’s the moment to talk about the in-game programming. The game was full of colors, but very “blocky”, and the animation wasn’t so sharp. The head of our hero was not well designed, he ad a sort of “tupè” on his hair, or it was surely a bad haircut (hahaha) The Amstrad version had more colours, but programmers could do better. The best part was of course the music, the best hypnotic mood I’ve ever listened to. It was so amazing, it forced you to continue playing the game until the end, or to discover where the lift takes you (I think most of you thought that it was the lift to the exit).

As usual, here’s the longplay, a sort of neverending theme tune, to listen again and again anda again….