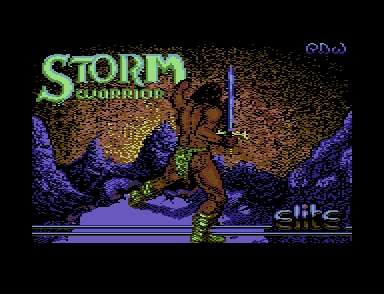 Some of you will remember the times in which games for Commodore 64 (especially if on tape) turned like stickers: since we couldn’t afford to buy many, especially if original, we resorted to exchanging … So it happened to receive between the hands still unknown games, but no less interesting than the most famous and sought-after titles. This is the case of Storm Warrior, which I met as “Jungle Warrior” (clearly being a “crack” made in Italy). The peculiarity of this version (the original title I discovered many years later thanks to the High Voltage SID Collection) consisted in the presence of a “trainer” already incorporated, which provided infinite energy. This allowed my brother and I to enjoy not a game, but a sort of “interactive demonstration”, a pixelated film accompanied by a very high quality soundtrack.

The game (not to be confused with the namesake published in 1984 by K-Tel International) is the work of Chris Coupe (programmer), Paul Walker (graphic artist) and Mark Cooksey (musician), the same team responsible for the Commodore 64 version of Forgotten Worlds (as shown on the cover): published directly in a cheap version under the Elite’s “Encore” label, winks at titles like Psygnosis’s “Barbarian” and Taito’s “Rastan Saga”; the player is called to take on the role of the prince of a kingdom on which an evil witch has unleashed a terrible curse, which is leading to the destruction of entire villages. The prince, armed with a sword, will have to reach the witch’s castle, crossing four levels bristling with obstacles and guarded by an army of warriors in the pay (or rather, under the influence of the powers) of the enemy.

On the title screen, you can choose whether to play with music or with sound effects: I prefer the latter choice, because in this way you have the opportunity to understand more immediately what happens during the game; however music is the backbone of the whole experience, practically the only thing that was worth buying Storm Warrior for in its time.

The opening piece, in the initial part, is pervaded by a gloomy atmosphere, accentuated by the absence of major chords in the progression; after a brief introduction the trend becomes more rhythmic, up to a change in tempo, which anticipates a metric change that will characterize the piece up to the coda, whose main function, in addition to echoing the dark initial atmospheres, seems to be that of bring the key and tempo back to those of the introduction.

Our hero has only one life available, and its “energy” is represented (in a very original way) by the passage, in the lower part of the screen, of death itself: when the grim reaper has passed the tree on the left, it will be the end … The energy of the enemies is instead represented by a number placed next to the relative graphic representation in the lower corners of the screen.

The first level takes place in a forest characterized by small streams, rocky hills and bare trees. The music that accompanies it is characterized by a very simple structure: a harpsichord plays an arpeggio structured like a canon for the entire duration of the piece; to it is added first the bass, and then a flute, which plays two themes, each repeated at the lower octave: the first is quite linear (however embellished with numerous embellishments), while the second is more articulated. The harpsichord then repeats the motif of the canon twice (the first in the upper octave), and after a new exposure of the first theme by the flute, the piece starts again from the beginning.

The first screen of this level has no enemies or obstacles, and therefore gives the possibility to practice with the commands: study the various moves (three attack and two defense), in addition to the basic movements (bending, jumping and changing direction ; you can also throw a kick at the opponents to be able to move them away slightly in order to have them more easily within reach of the sword) is essential to better face the game. The first fight takes place in the next screen, while in the third you will have to face the first “natural” obstacle, that is the stones falling from a tree (the only way to avoid them is to jump, but it is almost impossible to escape unscathed from their attack). Often the enemies are “hidden” (albeit clearly visible in “transparency”): they can only be hit once they come out into the open. It is important to know that – in this and in the second level – you cannot go to the next screen unless you first defeat all the enemies present. In the tenth screen you will have to face a particularly tough green monster: it takes four hits to take it down.

In the second level we find ourselves in a ruined fortress, littered with enemies and fire-breathing statues. The music is a sort of homage to Johann Sebastian Bach (the author’s main source of inspiration, according to his own words): it is a small fugue in D minor, with a very complex harmonic structure (which includes a couple of modulations ). It is my favorite piece of the entire soundtrack. Here too we will have to face human enemies and overcome various obstacles before the final monster (which, however, will require one more hit than the previous level).

The third level is a sort of “descent into hell”: the song that accompanies the action takes its cue from a passage already used in the music of the title screen and is characterized by a descending harmonic turn (as well as by numerous changes of key – this time to go up, certainly to emphasize the increased tension!). I don’t know if Mark Cooksey had had the opportunity to observe the various levels, but here he really did a commendable job: music and images go perfectly together! It is a fairly easy level to pass, as it is not necessary to kill enemies to move on to the next screens; however, attention must be paid to the stalactites present in some points, which detach as the player passes.

In the fourth level we find ourselves fighting in a cavern covered with fire-breathing skulls, and whose “floors” are connected by moving platforms, in an epic final confrontation properly highlighted by pressing music, characterized by a couple of repeating themes on two different shades. Enemies can (indeed, must!) Be avoided, but it will be necessary to calibrate the jumps well in order not to be forced to retrace their steps (thus exposing themselves to further damage caused by the fireballs that the skulls launch repeatedly, and from which you can hardly defend yourself).

A short jingle anticipates the last music of the game (leaving aside that of Game Over, which in the past I had not been able to listen to precisely because of the “trainer”!), A “disco-rock” with a structure similar to that of the music of the fourth level (two themes that alternate on different tones and octaves) that accompanies the writing of the name for the ranking of the scores.

All in all Storm Warrior it is a fairly short game (forty screens), with a certain variety of situations and settings; the fights are not very interesting, since it is sufficient to always use the same shot to be able to defeat the enemies and get out of the fight virtually unscathed, while obstacles such as the rocks of the first level and the fireballs of the fourth add thatelement of causality that not everyone appreciates. However, the short length of the game makes it less frustrating (or rather, more acceptable) to start all over again after yet another fateful “Game Over”. It is therefore a beautiful game to look at and – above all – to listen to, but not very fun to play: my memory, in fact, will remain mainly linked to its splendid music.