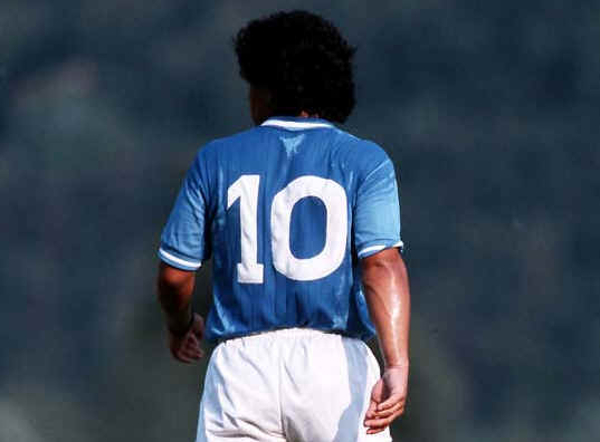 The classic title from the bottom of a few bottles of beer. Also because Shilton was England’s goalkeeper, he didn’t play handball (or maybe he did it secretly) and Maradona was the most famous “Diez” in the world.

I put on the cassette, I see the colored lines start and I go to play football with my friends, I come home, I take a shower but on my monitor I still see the colored lines. So sketch by Sandra and Raimondo. Here finally the lines launch the last screech. The game is ready. I am the goalkeeper and I have to defend the goal from the best 8 English teams. At least it’s not handball. Not even the shadow of Maradona. I pick up the package and reread the title. And I understand. It is not the title. It is the cry of the British against Argentina. The hand of God disguised as a Saxon genitive.

In 1986 there was no internet. When I saw Argentina-England I was watching a football match. I listened to Giorgio Martino commenting on what will be called the most beautiful goal in the history of football by Diego, but under his voice another one could be heard, possessed, in Spanish. It was that of Victor Hugo Morales, Argentine commentator, who in a spasmodic crescendo almost overlapped the voice of his Italian colleague:

, I thought. I turned off the TV and it took years to realize that I hadn’t understood anything.

England-Argentina had started 20 years earlier. At Wembley. Always World Cup. Indeed Rimet Cup. The one who took Brazil home in 1970 for winning three world championships. There were the King and Queen.

England was that of Sir Bobby Charlton, Nobby “Nosferatu” Stiles, and Bobby Moore. Argentina was among the favorites driven by striker Artime, one who had an average goal of almost two goals per game. It ended with what in Argentina they labeled “El robo del siglo” (the theft of the century). German referee Kletein scored four Argentine players in the first 30 minutes in the notebook (there were no cards at the time) while “nosferatu” Stiles collected tibias in every clod of pitch (the nickname was due to the fact that he had lost all teeth and replaced them with a prosthesis). Then the captain “El rata” Rattin, old school midfielder, slightly tripped the English legend Charlton who falls on the edge of the area. He also goes to the notebook. The Artime bomber protests. Notebook. Then Kletein points to Rattin and throws him out.

Rattin, who speaks neither German nor English, does not want to leave the camp. He wants to know what he did. The comrades try to accompany him out. Wembley whistles it. He approaches in disbelief on the sidelines and … sits on the red carpet reserved for the passage of the English Royalty. Wembley thunders and rains everything. Rattin exiting sees that the corner flags have the Union Jack. Coming out he squeezes one. “Animals”, the English coach Ramsey called them next “sir” for the obvious feat. Rattin goes out. L’Inghilterra vince 1-0. “I don’t know what he told me… but he was looking at me grimly. And so I sent him off “, was the referee’s explanation years later.

The British cheer. Argentina marks in the notebook.

In the following years Argentina was shaken internally by the end of Peronism, and by the dictatorship of Videla who entered a Casa Rosada now devastated by inflation and debt. “First we will eliminate the subversives, then their collaborators, then their sympathizers, then those who will remain indifferent and finally the undecided.” General Sain-Jean declared. And so it was. Thousands were tortured or killed in what was called “the dirty war”. The only joy of that period was the world championship won in 1978 thanks to a magnificent Mario Kempes. And here Galtieri enters the scene.

Grandson of Calabrian immigrants, Galtieri was part of the 1976 coup with Videla. In 1981 he went to the United States where he received the endorsement of Reagan, who saw in the “Majestic General” a bulwark against communism in South America. Of course. Because in those years the United States had a particularly aggressive foreign policy towards the communist regimes. Already in Chile they are said to have armed the hand of General Pinochet to shoot La Moneda, the presidential palace in which the then President Allende died holding the machine gun. So perhaps they saw the Argentine Pinochet in Galtieri, but history tells us that in 1981 General Videla was deposed first by General Viola who lasted only a few months and then gave way to Galtieri. And if you are a South American general and you have problems with popularity because until yesterday you were sending the military to take people even while they were sitting on the toilet to torture them, and in addition you have the support of the Americans, what do you do to regain popularity? Bruno Vespa wasn’t there yet, so it was war.

Obviously Brazil and Chile were out of the reach of the Argentine army. But there was a group of islets, the Malvinas, which the English captain John Strong had baptized Falklands in the name of the Viscount of Falkland Anthony Cary. Here the Argentines had already built the airport in the only town, Port Stanley, and the inhabitants did not even have the right to vote in the United Kingdom. In addition, the ownership of the islands had already been claimed by the crown of Spain, which then, not knowing what to do with it, was not interested in it. In those years the UN viewed post-colonial annexations with a certain indulgence, especially for African issues, and Galtieri, on the strength of international law that annexed the former Spanish colonies to Argentina, made his move. Taking advantage of the divestment of two of the English battleships in support of the islands, the Argentine troops landed in the Malvinas between the wonder of the sheep and the surprise of the English troops, who managed, due to an unfortunate accident, to count even a victim.

He was one of the ten heroes who barricaded themselves in the town hall in defense of the British crown. The other nine were arrested and released. Faced with such a great victory, Galtieri’s opponents calmed down. Argentina had defeated the British crown. The Falklands were back to being Malvinas, Port Stanley was baptized Puerto Argentino and driving on the right was imposed with no little dismay of the local motorization (also because, as everyone knows, then you find yourself with all the junctions in reverse). But Galtieri had not reckoned with the English government of the time. That is with the “Iron Lady” Margaret Thatcher, who had just made the British swallow a social plan of tears and blood. And now the regaining of popularity was presented to him on a silver plate. After clarifying with the United States that they had to choose between them and the Argentine puppet, they sent 11,000 men to the Falklands aboard 127 naval units, including 5 nuclear submarines. One of these sank the jewel of the Argentine navy, the cruiser General Belgrano, causing 300 deaths.

The Malvinas were bombed continuously for 19 hours. There were 255 British victims, 649 Argentine victims as well as 3 civilians. Sheep not calculated. That was the consecration of the Harrier aircraft. Also in electronic version, since the video game of the same name sold 250,000 copies. Not as much luck had Falkland ’82, a turn-based strategic war game. Obviously both of the English brand. Galtieri, after leaving several messages on the White House answering machine, was arrested for crimes against humanity. Argentina had been humiliated once again by the British.

And here we come to 1986. President Alfonsìn was making a clean sweep of the military regime that had oppressed the people for a decade. The issue of debt and how to repay it was addressed. In short, Argentina was getting up. There were also the World Cup. And here nobody expected much. Mario Kempes had retired, as well as one of the biggest number 10 in Argentine football. His name was Osvaldo “Ossie” Ardiles. And he played in England. In the Spurs, or Tottenham for those who are not English for most of their career. Except in 82 when he was forcibly repatriated due to the war in the Falklands. Called a traitor both at home and in England. Unique White Hart Lane retreat. In May 1986 the Spurs want to pay homage to the career of the greatest Argentine player by organizing a friendly match with the Milan International. It so happened that the Argentine national team was passing through London as a stopover for a friendly match with Norway. The most talented player of the time, a certain Diego Armando Maradona, learned of the event in honor of his national team mate and idol of English and Argentine fans, agrees to make a trip to White Heart Lane to play a segment of the match. The world championship was just around the corner in Mexico. Ardiles would not have been there. Maradona yes. It is not known if they only talked about football, or the Falklands or what else. But surely that was the moment when Maradona took the 10.

And with that 10 consecrated to him right in the land of Albione, Maradona faces the English. Hand Goal. 1-0. The referee does not see. The English goalkeeper Peter Shilton, the videogame one, defender of the English goal for 10 years, only one game from Faban Barthez’s record for the number of games without conceding a goal, is a fury. The British surround the referee. They protest. They do not understand. “El Rata”, now an Argentine parliamentarian, looks from home and laughs. Of taste. All of Argentina with him. Maradona later revealed that he had convinced his teammates, at first still, to celebrate the goal with him by telling them: “Come and hug me or the referee will not validate it”

The British, those who bludgeoned in the name of “fair play”, are not there. It cannot be lost through incorrectness. And then Maradona takes the ball, dribbles them all and scores 2-0.

Impotence overwhelms the British. Batista was there on the pitch. Think of all the other levers of ’62 sent to fight at Malvinas. Now you know how it feels. Millions of Argentines must have thought. Then Lineker will do 2-1 with 10 minutes left. But nothing will change. In Argentina they called it the Mano de Dios. And I think they weren’t just referring to Maradona’s.

Diego was a great player for all of us, the best for me, he had ups and downs in life, but he was a generous and charitable man. He was not an extraterrestrial or a super man, he was the last of the knights, when he played he made millions of people dream. If Argentina has been able to recover from economic crises and financial defaults, it is partly due to him too. Have a good trip Pibe de Oro. Pep Guardiola, Manchester City manager, commented on his passing, “It doesn’t matter what you did in your life, but what you did for ours”.

This story ends here, I leave you in the queue to download the games mentioned.

Francesco Casillo collaborated in this article.